O'Neill's Walk of Fame star in front of shoe store 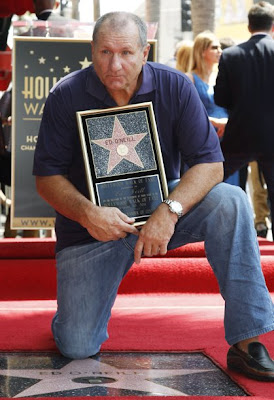 LOS ANGELES (AP) — Ed O'Neill's star on the Hollywood Walk of Fame is appropriately placed: in front of a DSW shoe store on Hollywood Boulevard.

The Emmy-nominated star of "Modern Family" received his sidewalk honor Tuesday in a ceremony featuring his two TV wives, Sofia Vergara from ABC's "Modern" and Katey Sagal from "Married," which aired on Fox.

O'Neill called the honor overwhelming and thanked fans, then quipped, "Just think, somewhere in this world a baby girl is being born and she is going to be my next wife." Vergara is 26 years his junior, and Sagal 11.

The 65-year-old O'Neill attended Ohio University and Youngstown State. He was signed by the Pittsburgh Steelers but cut in training camp. He taught social studies before his acting career.

Yahoo
Posted by GhettoFob at 10:21 PM

Email ThisBlogThis!Share to TwitterShare to FacebookShare to Pinterest
Labels: tv