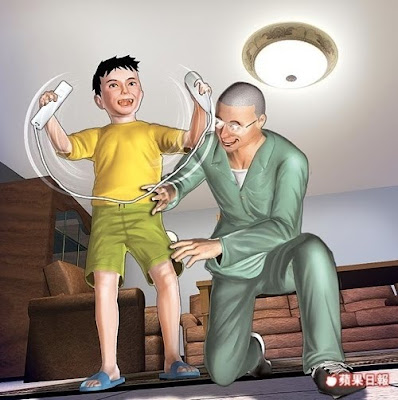 A 46-year-old Taiwanese man has been arrested for raping four young boys.

The perpetrator would invite young boys to his house on the pretext of playing his Nintendo Wii. Apparently, he would then sexually assault the children. One of the boys' mothers noticed that something was bothering her son, and he told what had happened to him. The mother then contacted the police, which began the investigation.

The man, who sports a shaved head, is supposedly not a real Buddhist monk, but rather, a "bogus" monk. He says that the sex was consentual.

Under Taiwanese law, it is illegal to have sex with minors under the age of 14 — regardless of consent. For each count of rape, the accused faces a seven year term prison sentence.

Kotaku
Posted by GhettoFob at 11:29 PM No comments:

By David Gelles and Richard Waters in San Francisco

Google is phasing out the internal use of Microsoft’s ubiquitous Windows operating system because of security concerns, according to several Google employees.

The directive to move to other operating systems began in earnest in January, after Google’s Chinese operations were hacked, and could effectively end the use of Windows at Google, which employs more than 10,000 workers internationally.

“We’re not doing any more Windows. It is a security effort,” said one Google employee.

“Many people have been moved away from [Windows] PCs, mostly towards Mac OS, following the China hacking attacks,” said another.

New hires are now given the option of using Apple’s Mac computers or PCs running the Linux operating system. “Linux is open source and we feel good about it,” said one employee. “Microsoft we don’t feel so good about.” 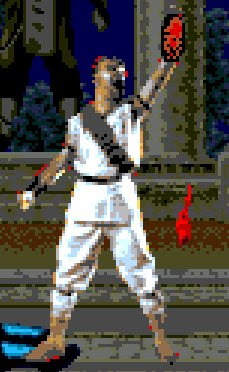 A U.S. cage fighter ripped out the heart of his training partner while he was still alive after becoming convinced he was possessed by the devil, it was alleged today.

Jarrod Wyatt also cut out Taylor Powell's tongue and ripped off most of his face in a brutal assault that police said looked like a scene from a horror film, officers said.

They claim they found the 26-year-old standing naked over his friend's body with parts, including an eyeball, strewn around the blood splattered room in Klamath, California.

Daily Mail
Posted by GhettoFob at 9:36 PM No comments:

Rosenberg, a Los Angeles California native, is suing Google because Google Maps issued directions that told her to walk down a rural highway. She started walking down the highway--which had no sidewalk or pedestrian paths--and was struck by a car. She is suing Google for her medical expenses ($100,000), as well as punitive damages. She is also suing the driver who struck her, Patrick Harwood of Park City, Utah.

On January 19, 2010, Rosenberg was apparently trying to get from 96 Daly Street, Park City, Utah, to 1710 Prospector Avenue, Park City, Utah. She looked up the walking directions using Google Maps on her Blackberry. Google Maps suggested a route that included a half-mile walk down "Deer Valley Drive," which is also known as "Utah State Route 224."

There's not much more to say--she started walking down the middle of a highway, and a car hit her. Who wouldn't have seen that one coming?

PCWorld
Posted by GhettoFob at 7:09 PM No comments:

Watch out who you kill in the virtual world, it may inspire someone to attack you in the real one.

That's what happened to one Frenchman, who was stabbed and nearly killed by a fellow "Counter-Strike" player, according to London's Telegraph.

Julien Barreaux reportedly spent six months looking for the person who killed his online character in a virtual knife fight, and eventually found the foe living only a few miles away in Cambrai, a town about 2 hours north of Paris.

The 20-year-old, armed with a real-life kitchen knife, went to the man's house and brutally stabbed him in the chest. The victim, identified only as Mikhael, survived the assault after the blade missed his heart by less than an inch.

"Barreaux was arrested within the hour and told us he had wanted to see his rival wiped out for killing off his character," a police officer testified at the trial, the Telegraph reported.

"You are a menace to society," Judge Alexiane Potel said. "I am frankly terrified of the disproportionate reaction you could have if someone looked at you the wrong way in the street."

New York Daily News
Posted by GhettoFob at 12:01 AM No comments: 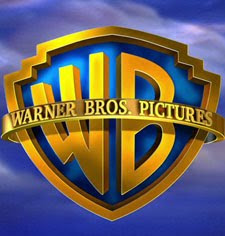 Warner Bros. has been sued for stealing an antipiracy technology patent.

The claim comes from a German company called Medien Patent Verwaltung. According to new infringement lawsuits filed against Warners, Technicolor and Deluxe in New York and Germany, MPV says that in 2003, it introduced the studio to a method of marking films with a distinctive code so it could track back sources of piracy to the exact theater in which an unauthorized copy originated. MPV says it has been trying to get Warners to pay for use of the technology since it allegedly began incorporating the invention in prints throughout Europe in 2004.

“We disclosed our anti-piracy technology to Warner Bros. in 2003 at their request, under strict confidentiality, expecting to be treated fairly," MPV says in a statement. "Instead, they started using our technology extensively without our permission and without any accounting to us. However, we had taken care to obtain patents to protect MPV's technology, and we are now in a position where we must assert our rights.”

Warner Bros. declines to comment on the dispute. But we've discovered that MPV made a little mistake in its New York lawsuit.

The patent that MPV cites in its complaint is 7,187,633, entitled "Motion Picture and Anti-Piracy Coding."

But our search of the patent records reveals that patent number has another title: "Marking of a Data Medium Material for Information Intended for Reproduction." There is another patent entitled "Motion Picture and Anti-Piracy Coding." The assignee? You guessed it: Warner Bros.

Did the Germans accidentally steal the title of Warners' own patent when suing the studio for stealing?

The answer appears to be yes. Reached for comment, New York attorney Richard Garbarini, representing the plaintiffs, admits the error and says he will file an amended complaint.

In the meantime, there's still the larger issue of whether a major studio stole technology to help it prevent people from stealing its movies.

The Hollywood Reporter
Posted by GhettoFob at 11:46 PM No comments:

WTF Are You Supposed To Be? 2012 Olympic Mascots Win The Gold In Fail 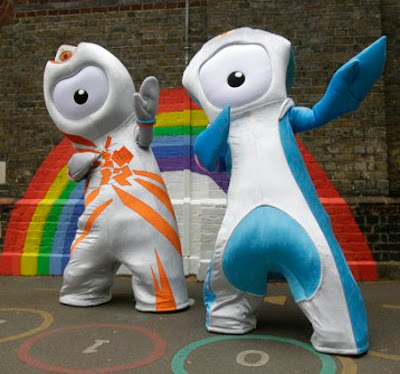 Geekologie
Posted by GhettoFob at 4:47 PM No comments: 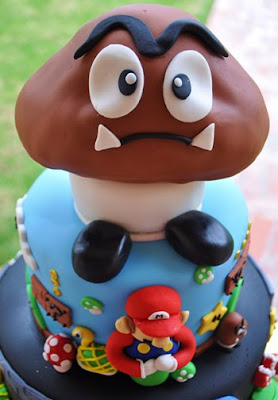 I Can Has Internets
Posted by GhettoFob at 4:45 PM No comments:

Behind The Burger: The Sad Reality of Ronald McDonald 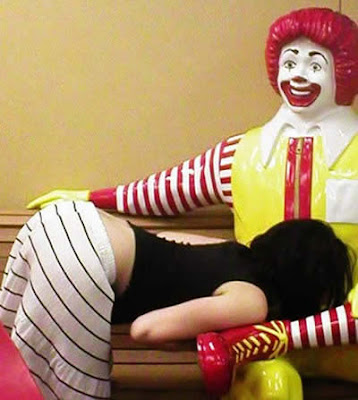 Top Cultured
Posted by GhettoFob at 11:37 PM No comments:

Email ThisBlogThis!Share to TwitterShare to FacebookShare to Pinterest
Labels: food

Email ThisBlogThis!Share to TwitterShare to FacebookShare to Pinterest
Labels: google 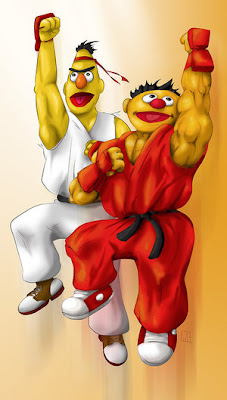 Capcom Unity
gavacho13@deviantART
Posted by GhettoFob at 4:25 PM No comments:

The Fatal Flaw With Portal on Macs 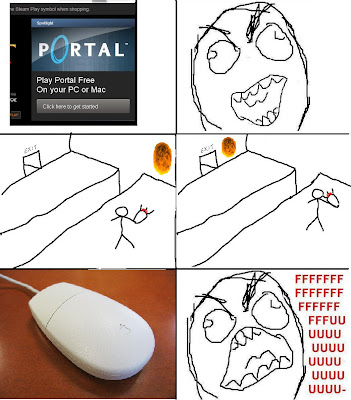 Gizmodo
Posted by GhettoFob at 5:46 PM No comments:

Is That A Cracked Version Of Max Payne 2 On Steam?

The Steam executable for Rockstar's Max Payne 2: The Fall of Max Payne bears a striking resemblance to a no-CD hack released by now defunct piracy group Myth. Could it just be a coincidence?

Kotaku
Steam Forums
Posted by GhettoFob at 10:08 PM No comments: 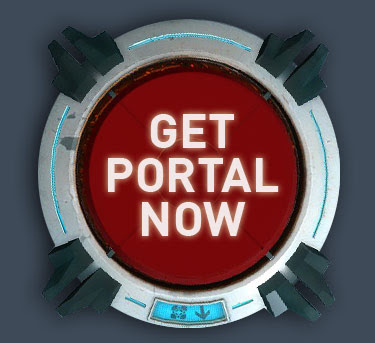 Portal used to cost money. Until May 24th, it's free. End of story.

Well, technically speaking, there are some strings attached. Fortunately, they're entirely decorative. We just like the way they look, swaying in the gentle breeze created by a million people simultanously fainting from shock at the news that Portal is free. Now you have no reason not to try Portal.

"I have a reason," some of you are probably typing into an angry email. "You see, sir, I own a Mac."

Well guess what: For the first time ever, Portal is also available for the Mac.

"Capital news! But the excellent puzzle adventure Portal won over 40 Game of the Year awards; Surely it must cost at least five or six hundred dollars."

You'd think that, especially since it actually won over 70 Game of the Year Awards. But, like we keep saying, Portal is free. Free on the Mac. Free on the PC. But only until May 24th. So you only have a few days to decide if your free copy of Portal is worth the price we're currently charging - which is you ever-so-slightly moving your index finger just barely enough to click the big red "download" button right there to the left.

Steam
Posted by GhettoFob at 5:53 PM No comments:

One common email we have been getting is people notifying us that they see live Humble Bundle key links around the internet on various forums, 4chan, and even Steam! I decided to look into this a little bit and try to guess how big of a phenomenon it is.

After some simple math, I estimate that over 25% of Humble Indie Bundle downloads are 'pirated' -- that is, users download from shared links from forums and other places without actually contributing anything. Note: that is not including BitTorrent and other sources.

How do people pirate the bundle? When I say this bundle is DRM-free -- I really mean DRM-free. Not only do the games themselves have no copy protection (not even a simple serial number check), but the Humble Indie Bundle website has limited copy protection. That means there are no download limits, everything is reachable on the command-line with 'wget', you can resume downloads, and do anything else you would expect to be able to do with a personal download link.

25% seems incredible given that you can simply pay $0.01 to be completely legitimate. Is this figure correct? Let's take a look at some raw download data.

Wolfire
Posted by GhettoFob at 5:28 PM No comments:

From the looks of this video, Dudley’s specialty seems to be getting lifted over some dude’s head and tossed out of the ring like some kind of Druidic virgin sacrifice.

Gunaxin
Posted by GhettoFob at 11:44 AM No comments:

Email ThisBlogThis!Share to TwitterShare to FacebookShare to Pinterest
Labels: wrestling

Wolfire
Posted by GhettoFob at 4:57 PM No comments:

FOX
Posted by GhettoFob at 9:18 PM No comments: