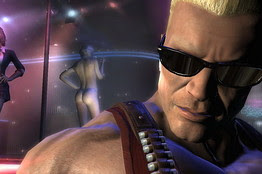 The first person shooter about a space marine with a penchant for off-color humor who battles aliens with increasingly destructive weapons, was to be the fourth installment in a series of games that garnered critical praise and generated controversy for its depiction of women. After 10 years in development, 3D Realms, the studio behind the game, announced it was shutting down in 2009.

The game is being finished by Gearbox Software and will be published by Take-Two Interactive, publisher of the “Grand Theft Auto” series. The game is being shown to consumers and the press for the first time at a video game convention today. Gearbox hopes to release the game next year.

The Wall Street Journal
Posted by GhettoFob at 11:01 PM